Media in our live.

1. What role does the media play in our lives?

Media does not only provide us entertainment such as music, video and games. It also plays a very important role in our life everyday. It provide us with the newest world wide information around the world such as U.S president Obama is trying make another move on something or in South Africa there are civil war going on right now. Media can come in many kinds of form such as TV, Phone and Computer social network such as Facebook, Twitter, Yahoo and Google. Nowadays media information has been traveling really fast from place to place. Throughout these few years media has been really helpful in our daily life such as providing us information about the economy around the world, protest in the middle east and Africa and how the world is slowly changing from time to time.


2.  Have you ever read or watched a news stroy that made you angry and want to take action?
Yes I have been angry and mad a lot of time when I'm reading news and watching TV about the world. Some of events that's happening in the world are just really cruel and I felt the excruciating pain in my heart when I saw the things that are happening around the world. For example, when we are watching the Hotel Rwanda I saw a lot of house were burned and people were slaughtered through the media. It just make me angry and I could barely control my emotion. At first, I wanted to take action in a bad way that might make the situation worst such as killing all the people in the army but after thinking for a while I told myself if I do that I'm turning to one of them. I decided if this kind of stuff ever happens again I would really be willing to take part in the action to help let the others know what's happening around the world that was hidden from us.

3. Who is accountable for the media


A lot of people are accountable to the media. Of course the people that posted the media must take responsibility to what they made because for those who are watching the media they want to know the fact and not what is not true. The media maker could not even make the issue to not a big deal or they could not exaggerate the situation too; only the fact. Also in my opinion I think the government around the world should be accountable to the media. They should consider to help each other not only to benefit them fr

om their economy but also they should help each other because in every country and nation there would be useful, helpful and worth learning culture to be spread and to be shared around the world. Moreover, if you help the others the world would be a better place for everybody to live in as God teaches us that we should be selfish but helped the others when they needed our help. As in Hebrew 13:16 it said do not neglect to do good and to share what you have for such sacrifice pleases to God.

Luke 6:38 Give, and it will be given to you. Good measure, pressed down, shaken together, running over, will be put into your lap. For with the measure you use it will be measured back to you.
張貼者： Billy C 於 上午7:19 沒有留言: 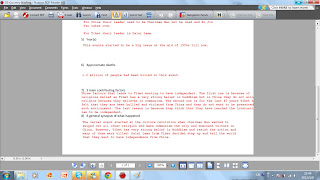 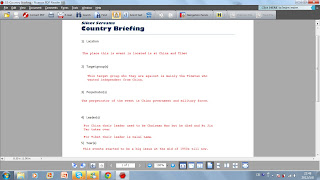 I've read a lot of news and article telling the world that Dalai Lama from Tibet and his people are seeking independence from China. He told us that the international investigation to China's on demonstrators in Tibet said that around hundred of people had died. 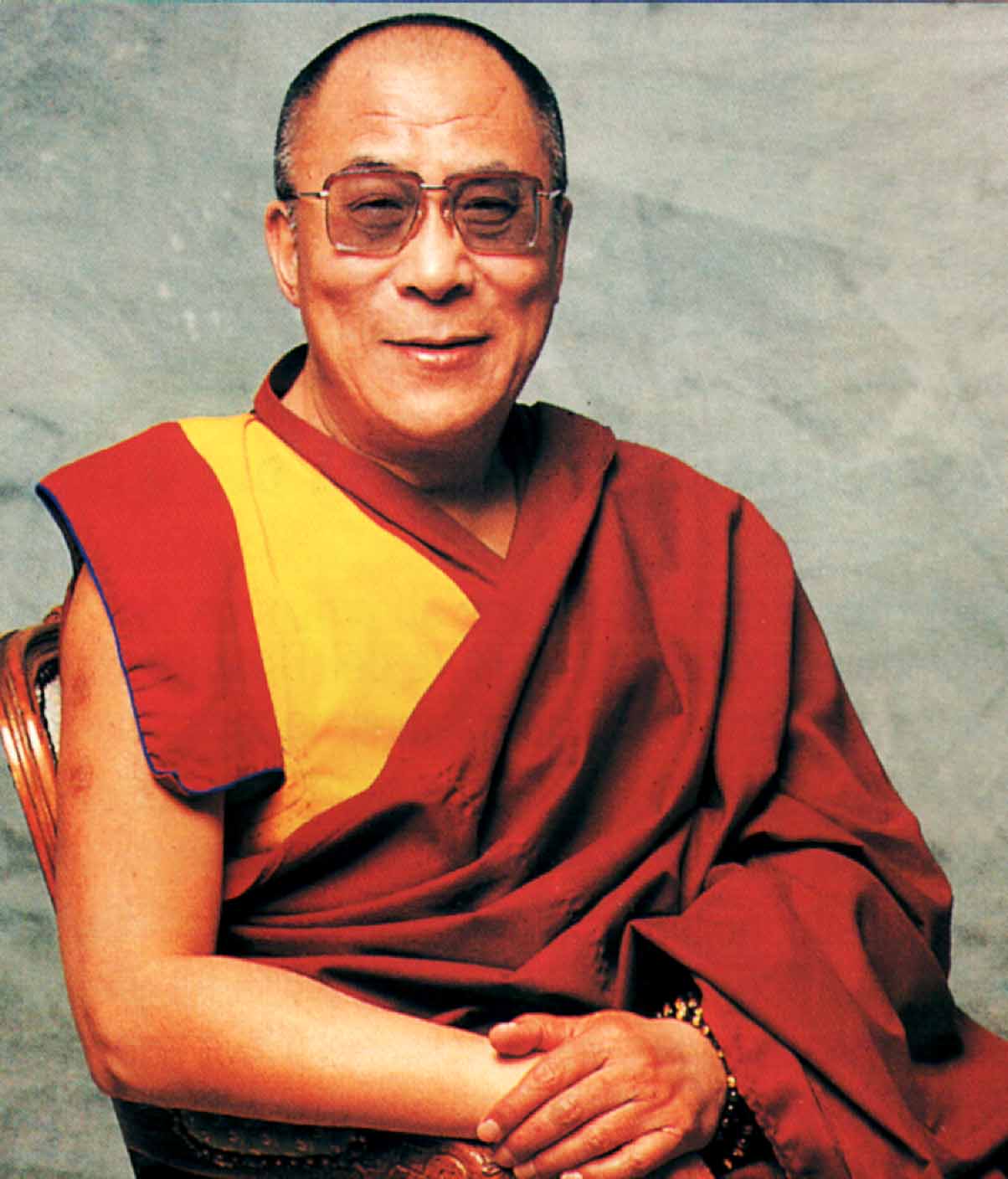 In the perspective of China's government they think that they are three reasons why they claim Tibet as their own land. First the government believe Tibet's territory had left over for China in thirteenth Century when China and Tibet were still in the control of Kublai Khan Empire's control. The second reasons is that China is a very populated country and the government has a lot of society problem. Thus, China found the society can be better if they could have more land from Tibet so the government can take over Tibet and find a way to make life better for their people. Third China has a thought that Tibet needs their help in order to have a balance and to maintain their successful society to prevent Buddhism which China is against to influence Tibet culture too.

However in Tibet's opinion the think that they had been not given rights in the past 40 years by China government. Second China also destroy Tibet's culture, elimination of religious freedom and their religion symbol too. Third, they think that they are given rights by global law to maintain their own government instead of letting China ruling and obeying their rule. http://www.angelfire.com/ca/pumpkingurl/index.html http://www.telegraph.co.uk/news/worldnews/1581875/Dalai-Lama-condemns-Chinas-cultural-genocide-of-Tibet.html
張貼者： Billy C 於 下午8:04 沒有留言:

Movie Guide for "The Boy in Striped Pajamas" 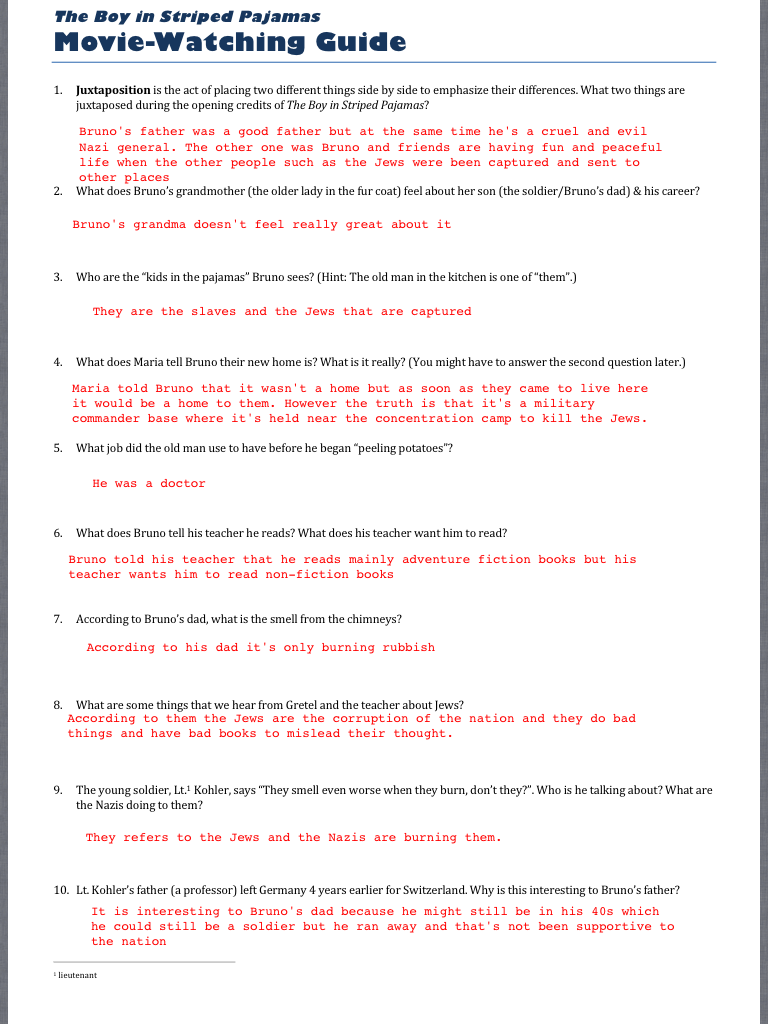 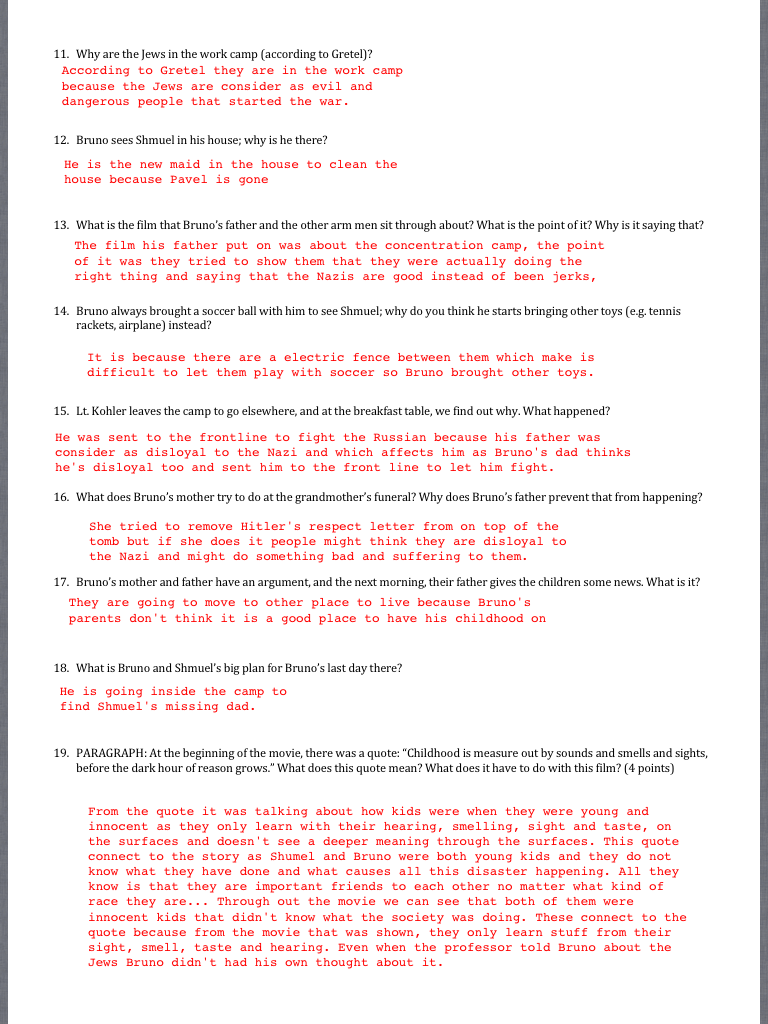 What is your duty to the world?

We had an interesting discussion about the quote, that Martin Niemöller had written after the war, during Wednesday's class. In my opinion, I think Martin Niemöller wrote this because he wanted us to know that although someone started something doesn't mean that others do not have any fault about the events. In addition, another point I think he wrote is to tell us that things people do to other people do not only affect them but also the people around them because of influence.

The second thought I have in my mind was that should the entire Germany population be responsible about what Adolf Hitler and Nazis did to the Jews and the start of WWII. After thinking about a day or two I decided that everyone in Germany should be shamed about themselves in some certain ways, by not stopping this tragedy happening. It is because if everyone steps up to the Nazi Party telling them that they are not right and they do not have the rights to kill the Jews and other races then it could be a different story and this cruel historical event would not be the ending. However, no one in the country was willing to help the Jews and themselves in this situation which cost nearly 11 million innocent life killed not including the military and put German themselves in another shameful place.
From this lesson I also learned that, this is not only talking about the Nazi party but also talking about relationship between people to people. I am going to list three simple examples how do these examples affect me in school, city ,and world. First talking about school, as we know we have to behave well to show not only the teachers that we have good attitude towards each other but also building a better atmosphere in school to have good education, environment and respect. I think I play a very important part in school towards the things I just listed as I might influence the new comers in school to act as the same way I do or friends around me that could be influenced by me.

In another perspective is on my city. In my own city I will be a good citizen because in the street you might meet some people from different country who are visiting your country. You would want to be kind and have a positive attitude in helping them when they ask for it so your city will have a good reputation in other people's point of view.
The last perspective I am going to talk about is how my action will affect my country. Of course

some people will think their action would not affect their country's reputation but it's wrong because as we learned from the spirit week that the action you make do not only affect you but other people around you because they are being influenced by what people around them are doing.
張貼者： Billy C 於 上午4:31 沒有留言:

Hey Guys I just finished my Tiki Toki Timeline.
The link for the timeline is http://www.tiki-toki.com/timeline/entry/28483/Billys-Holocaust-Timeline/
If anyone of you are interested feel free to check it out and perhaps help me with some grammar and improvements. Thanks!
張貼者： Billy C 於 上午5:13 沒有留言:

Today as we watched a video from twilight zone. The video "An Occurrence at Owl Breek Bridge" written by Ambrose Blerce. 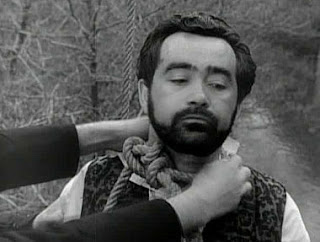 From the first person point of view as we can see from the video the protagonist was been tied up with a rope around his need and he was at the edge of the wood stand and was ready to be killed. However, he was very lucky as he escaped from the death penalty and the lyrics of the song that was played in the video showed and expressed the joy. From this example we could see from his point of view that he escaped the penalty however, we could not be sure if it was only what he was thinking or was it what really happened.

The next point I'm going to mention is the the third person omniscient point of view. Through this point of view, we could find it at the last part of the video which we actually hard what the narrator was speaking about.From the sentences that the narrator referred in the story clearly told us that all video except the start and the end were only just an illusion or you could call it imagination. The last point I'm going to say is third person limited. From this point of view the example I could find in the video was where he met his wife and there was a scene where it was repeated a lot of time and as the time slows down.However, through out this act, the character was mainly focused on the protagonist but more on his wife's mind of thinking and what she felt through out the act...
張貼者： Billy C 於 上午5:29 沒有留言: